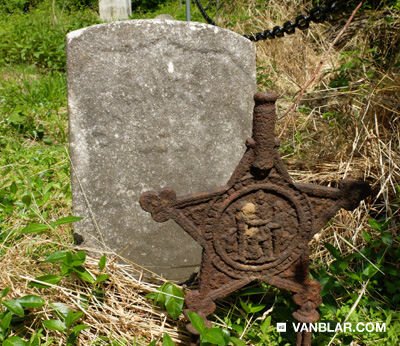 Saums Burial Ground, also known as Zion Road Cemetery or Danberry Cemetery, rests on a plot of land in the Sourland Mountains. The plot was once owned by the Saums family, but was later part of the Danberry family farmland. The land is now government owned and is preserved, though the cemetery hasn’t benefited from any preservation whatsoever.

When I first visited Saums in November 2011, it had been completely destroyed by an unexpected October snowstorm that brought dozens of trees down right on top of it. Hurricane Sandy further destroyed the plot, smashing and burying stones. Originally, the sun did not shine on this plot due to the concentration of trees. Hurricane Sandy brought so many trees to the ground that you can now see the sky from the middle of the plot.

A document outlining the cemetery, the headstones, and the headstone inscriptions written by Warren P Coon in 1935 listed a total of 25 headstones in all. When I visited in 2014, there were only 18 of these 25 that were still standing, some of which are now unreadable. Saums is home to mostly Civil War veterans and their families. There is one stone with a hand-carved inscription that dates all the way back to 1776.